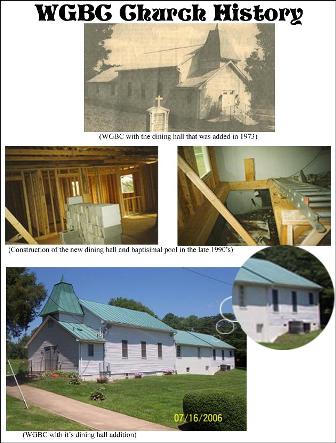 The was organized in 1907 with a few families: the Baker, Marshall, Addisons, Penn, Payne, and Cephas families.  They held service in their homes or outside if the weather permitted.  On April 11th,1918, by and between Nelson and Nannie Baker, Henry Baker, Sarah Chichester, and Mary Baker being the heirs at law of Henry Baker (deceased), were parties of the 1st part.  K.W. Roy, Richard R. Horner Jr., and Morris Payne, Trustee’s of the Church were parties of the 2nd part. That for and consideration of the sum of twenty-five dollars ($25.00) cash in hand, paid by the parties of the 2nd part to the parties of the 1st part, at and before the sealing and delivery of the deed.

Because these few members “walked the walk” not just “talked the talk” – they told others about the love of Christ and the membership increased.  They were one body in Christ, few in numbers but they accomplished so much through Christ who strengthened them.  In those days few records were kept, so much of the information in the history of was gathered by word of mouth.  In 1985, the church history was finally compiled.   Praise God!

Walnut Grove was blessed to have two of our senior members, who were still active and attended services regularly: Deaconess Emeritus, Edna Edmonds (The mother of our church) and Deaconess Dorothy Rowe.  Deaconess Emeritus, Edna Edmonds taught Sunday school for many years and was later appointed as the Superintendent of the Sunday School Department.  She served faithfully for many years but later retired due to health issues. Deaconess Edna Edmonds and her sister, Evangelist Ruth Cephas (deceased) would arrive at the cold church early to “start the fire” in the iron pot belly stoves to warm the sanctuary for service.

Deaconess Dorothy Rowe served on the Missionary Board, helped to raise money for the building fund and started the outreach ministry at the Center.  The Pastor, Deacons, and congregation continue to faithfully render services as they minister to, pray for and encourage the sick, shut-in and the elderly every 2nd Sunday of the month at @2:00 PM.  Although Deaconess Rowe was ill for several years, she is now on the road to recovery and continues to delight in serving the Lord.  Another faithful member, Deaconess Sarah Marshall (deceased), arrived early every Sunday morning to open the doors of the Sanctuary.  She always favored wide-brimmed hats and wore them with style.  She loved to invite the Pastor and other members to her home to share a meal after church service.  She would be highly offended if her kind invitation was not accepted.                          Thank the Lord!

Over the years, Walnut Grove has been blessed with several Spiritual Leaders: Rev K.W. Roy, Rev. Cunningham, Rev. George Pratt (who served 32 years until his death), Rev. C.C. Gray (who served for 13 years), Rev. William Schaffer and Rev. George Smith, Sr. (who served for 12 years).  During Rev. Smith’s tenure, extensive renovations to the upper and lower levels of the church were made, the parking lot updated and the air condition installed.

Rev. Walter Green (who served as pastor for 12 years) led many souls to Christ.  He was an excellent teacher, an outstanding preacher and truly a humble servant of God.  He preached the unadulterated gospel, in season and out of season.  He patterned his life after the teaching of Paul in 2nd Timothy 2:15 “study to shew thyself approved unto God, a workman that needeth not to be ashamed, rightly dividing the word of truth” (KJV).  Known for his promptness, he was seldom late for any service, including bible study and prayer meetings.  He always attended every service – even choir rehearsals and supported the choir for all outside engagements.  During Rev. Green’s tenure, a church budget was established, and a church tax identification number was obtained.  Books, tapes, TV, a VCR player, a PA system and a bus were purchased.  In addition, a coke machine was purchased by the Men’s Fellowship Group.  Other improvements included a baptismal pool, two bathrooms, new pews, stained glass windows, extended the dining hall and renovated the kitchen.  We were also blessed with the donation of a van to the church.

Rev. Green also set aside the 4th Sunday of each month for youth ministry during morning service.  The youth handled the complete service except for the preaching of God’s word. Walnut Grove has two sons and one daughter, Rev. William H. Jackson, Rev. Clarence Baker, Sr. (deceased) and Evangelist Ann Porter.  Rev. Baker along with Rev. Green was instrumental in increasing membership through various ministries.  In the past, Walnut Grove had two teachers: Deaconess Edna Lawson (Sunday school) and Deacon Archie Morse (New Believers/Salvation and Baptism Orientation Class).  Our new Superintendent of the Sunday School Department, Bro. William Lawson, was appointed when Emeritus Edna Edmonds retired and he also served in leadership over the Usher Board for many years.  Our Treasurer, Brother Preston Winston has served in this position for 43 years and is a true blessing to our church.  He is very dependable and as one of our trustees, helps the church to spend wisely.  Brother Preston Winston is a very humble person, who is always willing to work for Christ.  The church grounds are kept beautifully manicured by our Trustee, William Penn and his father, Brother Fredrick Penn. Walnut Grove has two choirs: Voices of Praise and the Steps of Praise.
On November 11th, 2006 Walnut Grove was blessed to install our 8th Pastor, Rev. W. Leon Jackson.  Our Pastor’s Vision is “to touch the community with love in ways that will save lives and renew minds daily.  Building “God” fearing leaders that will change the future for Jesus.  Leaving all others to save that one lost sheep (Luke 15:1-7).  Pastor Jackson’s is to commit ourselves to God through witnessing in our community.  Presenting the word of God in the Spirit of love and hope to the unsaved that they may receive God’s increase. Nurturing and developing disciples within the Body of Christ for to expand the .  Pastor Jackson believes in his Purpose that “people want to join a church that knows where it’s going.  When a church clearly communicates its vision/destination, people are eager to get on board.  This is because everyone is looking for something that gives meaning, purpose and direction in life (Ezra 10:4).  Our church membership is 150 and growing.  We continue to pray and encourage our members and new believers to work diligently to be faithful servants in God’s service.
Also, under the leadership of Pastor Jackson, he has appointed new Deacons and Deaconess, Sunday school teachers and new ushers.  Established the WGBC website, created a church logo with stationary (including: business cards and envelopes), a Mid Day Prayer & Bible Study (every Wednesday at noon), a Homeless Outreach Ministry, a Book Club, a 1st Aid/CPR Nursing Training, a Young Adult Purity Class, a Back to School Backpack Program, an annual Women’s Prayer Breakfast, an Adult Core, a Youth Core, Youth Revival, Annual Youth Retreats, a Praise Team, a Praise Dance Ministry to include: Fellow-ship, Chosen, & The Leading Ladies of Promise and purchased a new church van.  Pastor Jackson extended the sanctuary by the removal of a wall partitioning off a portion of the dining area for the over-flow, upgraded the P.A. System, monitors, TV and cameras allowing for production of CD’s and DVD recordings.  Pastor Jackson’s attention to the upkeep of the church building includes, a new central air unit, 2 new wall units installed in the sanctuary, the painting of the roof, a new church sign and the continued beautification of the church grounds by Trustee, William Penn and a faithful few.  Additional land has been donated to by Deacon Andre and Deaconess Jean Marshall, allowing for an extension of the parking area and the future site of our new sanctuary. Also, under Pastor Jackson’s leadership, Deacon Andre Marshall, was officially called to the Ministry in 2008 and preached his Initial Sermon on January 31, 2009.
Our endeavors here at Walnut Grove are to praise God, by lifting up the name of our Lord and Savor, Jesus Christ, studying God’s word, reaching out to the lost souls, encouraging and training up our youth in the ways that are pleasing to the Father and asking for God’s blessings upon our lives.  We love, support and respect our new Pastor and 1st Lady Donna Jackson.  The expectations under his leadership is enormous, but truly we know that God will bless us for many years to come if we obey His Will, and allow His will to be done and not our own.  We must stand on the word of God in all that we do.  We must lean not on our own understanding, but rely on God’s word.  Only He is able to keep us from falling.  Being steadfast, unmovable and giving God the highest praise – Hallelujah! Hallelujah!  It’s not about us, but all about him, in the name of our Lord and Savior, Jesus Christ.

So in loving memory of those who have gone on before us, we thank you for their commitment in serving you and the legacy they have now left us.  Therefore, “I press towards the mark for the prize of the high calling of God in Christ Jesus” (Phil 3:14 KJV). Lord we thank you for allowing us to celebrate over 103 Years of service and we pray for your continued guidance in the upcoming year.  It is only by Your Grace and Mercy that we have made it this far.  We pray for continuous unity, peace and love for one another as we strive to build your Kingdom!